People of Theruvoram as Chefs for a Day

The people of Theruvoram faced a new challenge today. As mentioned in the previous blogs, Theruvoram's 'Theruvu Velicham' project houses a minimum of 25 people from the street and takes care of them by providing them with everything – including a place to stay, food and facilities for maintaining personal hygiene.

All of this is taken care of by the officials at the NGO themselves and the food is prepared inside the NGO premises itself. Today, due to certain reasons, the food was not prepared for the inmates and once the officials realised it, they came up with a new idea in order to make the task interesting.

The people of Theruvoram – including all the six interns from different colleges currently volunteering there, the staff and the founder himself, Murugan S, took it up in their hands to prepare the food for the day. Assisting chef Chengotte Rajesh, who also happens to be a relative of the founder, the food was prepared by them in less than three hours. After managing to make a considerably big spread, the food consisted of several items ranging from items served in a typical Kerala Sadya including Aviyal, Sambhar, Beans Thoran (Coconut based vegetable dish), Cabbage Thoran, Rasam, Papadam, Payasam (Kheer), served along with Rice, to typical Keralian Chicken Curry. All of these items were prepared by the team from scratch and they had a lot of fun in doing the same. A completely different experience for a few, every body assisted in all sorts of work – be it washing utensils, making the curry or washing 'Banana leaves' which are often used in traditional Kerala culture to serve food on.

Although tiring, the team had fun doing the work. All the items were made for many people as mentioned before and most of the times it is difficult for someone to manage cooking for so many people at the same time often leading to the loss of taste in the food. But the inmates liked the food prepared for them lovingly by the team and thoroughly enjoyed eating it. The team also served the inmates lunch in order to complete the experience. Afterwards, all of them enjoyed the wholesome meal together.

When ever some one calls from these districts in need of help ,I go there and bring the sick people lying on streets abandoned by their families

A pavement dweller from the streets of Thrissur became the 1,000th inmate at the Government-NGO temporary shelter in Kakkanad.

A pavement dweller from the streets of Thrissur became the 1,000th inmate at the Government-NGO temporary shelter in Kakkanad. In July, social worker Murugan S

Social worker  Murugan S. visited Thiruvananthapuram in June toprovide relief to the destitute people on the streets of the statecapital. 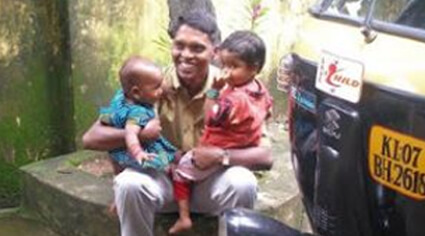 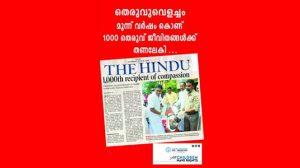